The Greatest Christmas Gift You Can Give This Year

Do you believe that God brings couples together for a purpose?

One of the lessons of the Christmas story is that God ordained that Mary would be the mother of Jesus; and that Joseph, Mary’s fiancé, would act as Jesus’ earthly father!  It was all in God’s plan that this special couple would usher in His great gift of salvation by parenting His Messiah together.  That’s incarnation … God becoming flesh … and living among us.

But the carrying out of salvation’s plan puts some unusual and powerful pressures on the young couple’s relationship.  You remember the story … Mary is pregnant … and Joseph knows he isn’t the father.  He’s devastated and embarrassed.  But, being a loving man of high character … he doesn’t want to publicly hurt or humiliate Mary.  So, Scripture tells us that he thought about putting her away quietly.

But God intervenes … and speaks to Joseph through a dream and reveals His redemptive plan.  Joseph, a man of faith, believes and trusts that God’s strategy is the best one for their lives together as husband and wife and chooses to stay with Mary.

Let’s think about that for a minute … if you’re married … God knew that the two of you would become life mates.  It makes sense then … that He had a purpose in bringing the two of you together.  So, the big question is: “What is that purpose?”

I believe that the primary purpose of all Christian marriages is the same one He had for Joseph and Mary … to usher in His gift of salvation to a sin filled world.

You and I do that today by reflecting the nature and character of God by the way we do marriage.  Can all within our sphere of influence see God’s unconditional love, grace, mercy and forgiveness by watching the way you treat each other?  That’s incarnation … letting people see God with skin on.

Yes, our marriages will encounter some challenging times … just like Mary and Joseph did.  But our answer is the same.  We must believe that God’s plan for us to be together is to introduce our world to Jesus.

The greatest Christmas gift you can give this year … is to flesh out who God through your marriage … that’s incarnation! 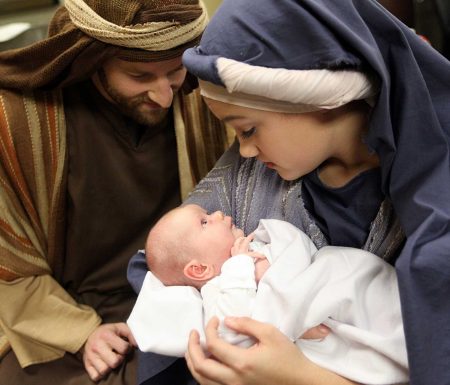 Someone once said a relationship is like a blanket…it can leave us struggling for air&nbs...